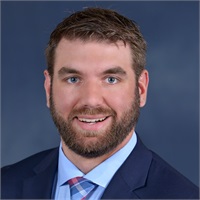 Benjamin R. Jones is an Investment Advisor at Schwartz & Co., Inc. He holds the series 7 and 66 securities licenses, as well as Life, Health and Variable Products. Ben manages accounts for high net worth individuals, as well as corporate and municipal retirement plans. He joined the firm in January 2014. Previously, Benjamin served as a mortgage specialist with Quicken Loans.

Ben was graduated from Hillsdale College, where he received a Bachelor of Science in Financial Management with a minor in Mathematics. While attending Hillsdale, Ben played five years of varsity football, earning academic all- conference in four of those years and lettering in two. He also served as a Student Ambassador and freshman tutor during four of those five years.

Ben is originally from Muskegon and now lives in Royal Oak. He enjoys competing in any sport, as well as catching a game of his favorite Detroit sports teams. In the fall, Ben spends time as the Varsity Head Football Coach for Cranbrook Kingswood.